Development work is going ahead again in Laurelhurst, the fine residence addition on the East Side, where the sales since the first of January have amounted to $115,000. The opening of the weather has permitted the street work to be carried forward, and this is now being done rapidly. This work has been retarded greatly during the two Winter months on account of the unfavorable weather, as during the long cold spell the ground was frozen to a depth of nearly a foot, and until the last few days grading was impossible. Under present conditions, however, the work will be completed within a short time.

One sale of considerable importance was negotiated last week to Archie Mason and C.J. Currigan, grading contractors who have been working in the addition. A purchase of an irregular shaped tract was made by the two contractors, who secured about an acre of ground on the O.R.&N. tracks at East 28th Street. This tract was bought for $13,000. They also bought the old red barn, which has stood in the center of the Ladd Farm for many years. The barn, 200x60 feet, will be moved at once to the acre purchased, and will be used for warehouse purposes. The old barn has been one of the landmarks of the district for many years.

The contract for covering the entire addition with sewers has just been let to the Barber Asphalt Company. That work will be started as soon as the materials can be placed on the ground. A contract was let yesterday to build a residence at a cost of $5500 on Multnomah Street near Sandy Road. This house, which will be of mission design, and will be one story, save for one of the ends, which will have a room on the second story, will be used as the home of the resident agent for the Laurelhurst Company. One room will be used during the season as an office for the Laurelhurst Company. It will be built at once.

Contracts have been let to two nursery companies for setting out shade trees on all the streets in the plat at intervals of 30 feet. It requires more than 2000 trees to cover the tract. The varieties chosen for this are maple, linden, cut-leaf, purple-leaf birch, elm and hawthorne.


The work of building new homes has been retarded during the Winter, but a large number of purchasers in the tract are now going ahead and having plans prepared for handsome residences, and some of these are being designed along lines which will make them among the finest homes in Portland.

The company is now building two large entrance arches at the doorways of the addition, one at East 32nd and Glisan Streets, and the other at East 33rd Street and the Sandy Road. These arches are being built of blue Tenino sandstone, and will present a beautiful appearance when completed. [emphasis added] 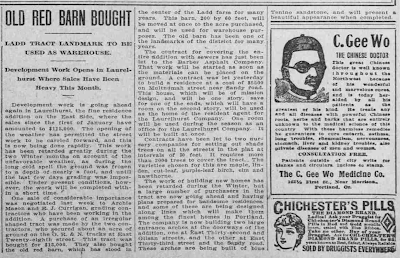 Two contracts for paving, aggregating $547,000, involving Irvington and Laurelhurst, were awarded by the City Executive Board at its session yesterday afternoon. The Laurelhurst contract went to the Barber Asphalt Paving Company and the Irvington contract to Elwood Wiles. The Laurelhurst job is the largest individual award of paving ever made in Portland. Both districts will be done by private work, under special waivers from the property owners.

In the Laurelhurst districts, which is one of the newer tracts to be opened, there will be six miles of asphalt pavement and sidewalks. Sewer contracts have already been let, and water mains to the extent of $55,000 will probably be authorized by the Water Board at its next meeting, bringing the grand total cost of the Laurelhurst improvement to more than $200,000.