(Forgive my transcription errors; as you can see the original is nearly unreadable.)

The Oregonian, 17 Jul 1930
Protests Hold Up Permit On School
Taxpayers Said to Have Had Too Little Time
Value Decline Cited

John A. Murray told the council ... survey he had made showed ... from one-third to one-half of ... property owners did not know the ... was to be considered by the council last week because they had not been notified by the city and that ... notice had been sent to a ... who had been dead for three years. City Auditor Funk explained ... the list of property owners had been furnished by the petitioners for the school.

More Complaints Made
Additional remonstrances against the permit for the school were filed by the property owners, who said that they had at least 70% of the [owners] against the project. The pro(unreadable) were referred to Commissioner ... for investigation.

Mr. Murray also contended that the ... has enough schools and that ... of the children would be drawn from as far away as Montavilla. He ... that a mortgage company would had interests in Laurelhurst was opposed to the school on the ground of property values would be depreciated.

Bishop's Ideas Cited
City Engineer Laurgaard declared ... member of the Catholic church was opposed to the granting of the permit and that the late Archbishop Christie had been opposed to the construction of a school at that place on ... ground that it was not a proper place for a school.

Dr. Banner Brooke declared that its investment of the property owners in the district were half a million dollars and that the benefit to a few children who would attend the school were not sufficient to overcome the ... that the se property owners would suffer because of he school, as did ... Roberts and others. It was declared that the school would not be needed by more than 30 children.

Mr. Laurgaard declared that the records would show that property had depreciated heavily adjacent to schools all over the city, and that in Laurelhurst lots adjacent to the present site of the Laurelhurst school had been offered for less than half of the price of lots some little distance away.

Some of the property owners in(unreadable) that, since the present proceedings came about through the inti(unreadable) of the city council, the council must determine whether the location is a proper one for the school without regard to what the church or the property owners might say about it ... contended that it was not a proper place because of the traffic conditions on East Thirty-nine street, because the church would not have sufficient room and because of its effect upon the neighborhood.

Hall S. Lusk, attorney for Archbishop Howard of the Catholic church, yesterday declared that County Assessor Welch never had authorized the statement credited to have come from his office that the erection of the proposed All Saints parish school at East 39th street and Laddington court would depreciate property in the neighborhood 50%.

"I have been informed by County Assessor Welch that no such information was given out from his office by his authority, and that if such a statement was made by any of his deputies, it was wholly unauthorized," Mr. Lusk said.

The statement was made before a meeting of the city council last Wednesday, at which time the proposed school was being considered, by John A. Murray, one of the residents of the community opposed to the school.

Assessment Gain Cited
"The falsity of the statement is demonstrated by the history of the assessment of Mr. Murray's property," Mr. Lusk said, after declaring that churches and schools were on a parity. "Mr. Murphy's property is directly across the street from All Saints church. If schools depreciate the value of property so do churches.

Mr. Lusk also questioned the statement of O. Laurgaard, city engineer, that the late Archbishop Christie was opposed to the construction of a school on this site.

Bishop Found Misquoted
"Those who were in his confidence knew nothing of any such opposition," Mr. Lusk said in discussing the reputed opinion of Archbishop Christie," and I suspect that neither does Mr. Laurgaard, but that he is merely repeating what he has heard from someone else whose sources of information than his own."

Under the city zoning ordinance schools and churches are banned from class 1 and 2 unless the council shall declare in a particular case that the maintenance of a school or a church within a residence district is not inimical to the public welfare, Mr. Lusk pointed out.

"The city council up to this time," he said, "exercising a wisdom greater than that of the ordinance has only in one instance as far as my knowledge goes, refused a permit for the erection of a school in a residence district."

By a vote of 3 to 1 the city council yesterday granted to the Catholic church a permit for the construction of a school in Laurelhurst over the protest of 73.8% of the property owners.

Commissioner Mann voted against the permit for the school, saying that he would grant a permit to any church any place, but that he believed that a school was a different matter.

The school will be erected at East 39th street and Laddington court, which property owners in the district declared was not a property place for a school; that it would depreciate their property; that it was not needed and that children would be endangered because of the busy traffic arteries in that neighborhood.

Hall S. Lusk, for the church, denies that the late Archbishop Christie had not favored a school there, and said that there was no authority for the statement that the county assessor believed the school would depreciate property. He said property in the neighborhood of another school had increased in value. He also said that, if the council denies the permit, the Catholic people of the city would feel like they were being discriminated against because of their religious, although the property owners denied any religious opposition and pointed out that some Catholics in the district were opposed to the school.

A delegation representing arroximately 80% of the property owners and residents near the site of the proposed parochial school at East 39th street and Laddington court will present a protest against building the school there tomorrow at 10 o'clock before the city council, according by J.A. Murray, 175 East 39th street North, and Morris Taylor, 1121 East Glisan street, representatives of the remonstrants.

"We wish to keep commercialism out of Laurelhurst Park, where the property owners pay 50% more taxes than those in any other unrestricted distrct in the city for this protection," said Mr. Taylor yesterday. "We are not opposing the proposed erection of the school for religious reasons. Depreciation in property value would be one of the effects of placing a school here. And if one school comes in, what is there to prevent another from moving in? If it were a church, it would be all right."

They also maintain the erection of the school there would cause complications on two main arteries of traffic and that the church has insufficient room for such an improvement.

By a vote of 3 to 2, the city council yesterday denied a permit for the Catholic archbishop of Oregon to erect a school in Laurelhurst at East 39th street and Laddington court, and thereby started litigation in the state or federal courts on the constitutionality of zoning ordinance.

Hall S. Lusk, attorney for the church, declared that a test of the constitutionality of the ordinance will be made, although the state supreme court has passed on the question. He said that he had not decided whether the matter would be tried out in the state or federal court.

Commissioner Riley’s unknown vote determined the action of the council, the roll-call being: Ayes, Mayor Baker and Commissioner Pier; nays, Commissioners Mann, Barbur and Riley. Previous steps in the proceedings had indicated that the vote would be 2 to 2, with Commissioner Reley determining the issue.

The vote ended, as far as the city council is concerned, a long battle on the part of the property owners in the district to prevent the entrance of any more schools, particularly directing their attack on the proposed Catholic school on the ground that the church did not have sufficient room for development and that it would depreciate the value of their property. Catholic property owners in the district and members of the church that proposed to erect the school were lined up with their neighbors against the project.

The city planning commission reported a remonstrance of 77.3% against the permit, and additional names were presented which John A. Murray declared would bring the total up to 80%. He pointed out that the property owners want to keep the district restricted and that they were overwhelmingly, Catholic and Protestant, against the permit.

Mayor Baker declared that the city had granted a permit for the erection of the Christian Science church in the district, for the erection of the public school there, and that it grans permits for churches and schools all over the city in residence districts. He said that denial of a permit to the Catholic church would be a denial to a group of citizens of the same rights that had been granted to others.

Hall S. Lusk, attorney for the church, pointed out that the council, as far as he knew, had never denied a permit to a church or a school in a residential district until the permit for the Catholic school in Firland was denied a few weeks ago.

Mr. Lusk recited the history of the application pointing out that it was not possible for the church to get the required 50% consent and that because of the fat the council had started the proceedings. He said that the right of a property owner to use his property for any lawful
purpose could not be determined by the vote of the people of the district, and for the council to deny the permit it would have to declare that the school would be a detriment to the residential district and against the health, peace and safety of the community. He said that such a condition was absurd. 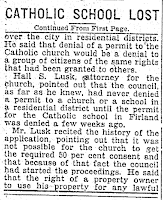 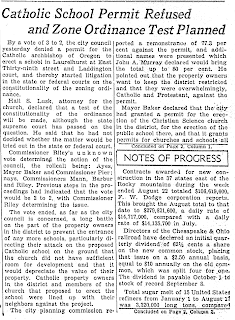