Laurelhurst, Portland’s beautiful East Side residential district has been making big strides all the year, there having been built since the beginning of the building season over 100 dwellings. Many of these new homes are very attractive and costly. There are a large number of new houses planned of still more elaborate designs, several of the new houses to cost from $10,000 to $30,000.

Builders have been operating in Laurelhurst all Summer, and they find ready sales of modern houses, so great is the demand of buyers locate in a district containing all modern and standard improvements.

W.W. Ward has purchased the northeast corner at East 39th and East Davis streets for $4750. With this purchase Mr. Ward now has 110x200 feet. He will make extensive improvements on the grounds. He completed a handsome home on this site some time ago. W.B. Moore has sold his new, modern, seven-room house on East Everett street to William Neilson, who will occupy it as a home.

The new residence of Charles M. Dewey, of the Pacific Paper Company, which is being erected by the Moore Bros., is nearing completion and will be ready for occupancy by October 1. Judge Herbert Gale, of Manila, P.L. has purchased the residence recently erected by the National Realty & Trust Company on East Everett near 42nd, in Laurelhurst. T.G. Tidball has just purchased for a home the seven-room house just completed by Architects Hertz & Dole in Laurelhurst, on East Everett near 41st street. H.W. Hughes, of the Hibernia Savings Bank, has just occupied his beautiful new bungalow recently erected on the corner of East Davis and 41st streets, Laurelhurst. Mrs. Hughes is a daughter of Senator Tillman of South Carolina.

George W. Walker has just moved into his new bungalow on East Burnside street near 39th, Laurelhurst. C.B. James, of the Swetland Candy Company, has purchased the corner on East Davis and 39th streets, Laurelhurst, and will erect a beautiful new home. F.H. Brown, of the Brown Portable Hoist Company, a recent arrival from Saginaw, Mich., is just completing his beautiful new home at a cost of $12,000, at the corner of Hazelfern and Flanders streets, Laurelhurst.

Ellsworth Pickel has purchased the Gregori Guistina Italian mission residence on Laddington Court near Glisan street, for $12,500. H.W. Lempke recently sold his Irvington residence and has moved into his new home on Royal Court and East Flanders, Laurelhurst. Charles T. Chamberlain has just moved from Irvington into one of the new bungalows recently erected in Laurelhurst, on East Davis near 43rd street. Dr. J.D. Fenton is a new acquisition to Laurelhurst, occupying a residence recently completed by John B. Hubbard on East Flanders, near Miramar place.

Mrs. N.M. Bonnewell has recently occupied the beautiful new bungalow recently built by Asa Wyman & Co., on East Flanders street. Mrs. Anna H. Park, a recent arrival from Minneapolis, has purchased the Helmbach residence on East Flanders street near Royal Court. J. Moody, of the General Electric Company, has purchased a modern, 10-room residence on East Davis street, Laurelhurst, and is now occupying it. H.R. Albee is now occupying his beautiful new residence on one of the finest sites in Laurelhurst, overlooking Ladd Park. Daniel W. Pierce is erecting a new home on East Ash, near 32nd, Laurelhurst. The Provident Trust Company is just finishing a new home for John J. Valentine, near the corner of East Glisan and 39th streets, Laurelhurst.

Hugo L. Kerble, of Lipman Wolfe & Co., is occupying his new home just completed for him by the Adams Contracting Company, on Floral avenue, near Peerless place. F.E. Clements has taken the Nelson residence, corner of East Glisan and Hazelfern place, Laurelhurst. F.H. Gloyd has purchased from the Oregon Home Builders, a modern, seven-room house on East Glisan street, between East 39th and 41st streets and is now occupying it. Wyatt, Estabrook & Ray have sold their modern 10-room house recently completed on Glisan street near Miramar place, to George A. Brown, a recent arrival from Eugene. Dr. A.E.T. Buckle is just completing his new home on Laddington court, near East 39th street. A.J. Cartwright, who recently sold his home on Hassle street, near 39th, in Laurelhurst. Henry Cepo is completing his new residence on Laurelhurst avenue, between 39th and 41st streets. Lloyd Lawson, with the First National Bank, has just moved into his new bungalow in Laurelhurst, at East Davis, between 39th and 41st streets. 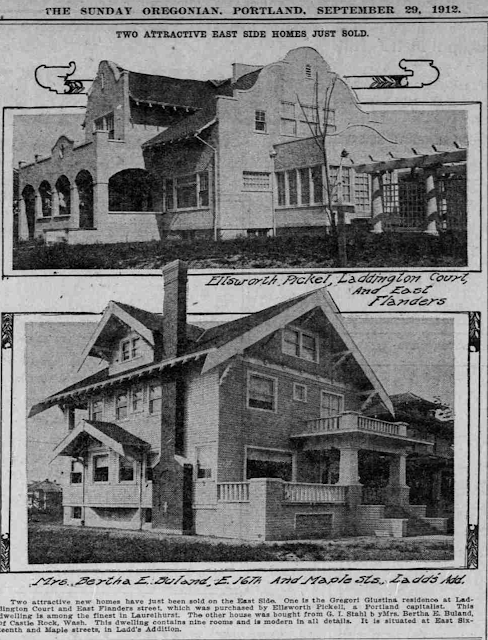