Funds for the bases for two statues to be given to the city by Dr. Henry Waldo Coe will be provided despite the state tax conservation-commission which eliminated $7000 from the city budget for that purpose. Mayor Baker announced yesterday. Just how the mayor planned to overcome the veto of the tax commission, he did not indicate yesterday, but he declared that the money would be forthcoming and the statues saved to Portland. One is a statue of Joan of Arc and the other is George Washington. Later, Dr. Coe has announced that he plans to give the city a statue of Lincoln.

All city officials were irate yesterday at the refusal of the tax commission to grant the funds for the statue bases. There was a suggestion from city officials and from attorneys and business men that a collection be taken to raise the funds. Dr. Coe is opposed to the collection idea because it would mean a heavy tax on the few who would contribute, and he feels that the statues will be of benefit to the whole city. He has had invitations from Seattle and many other cities to donate his statues there, but he said that he would wait awhile, as he had hopes that Portland would want them.

"You always have more trouble with your best girl than with any other," the doctor said, "and Portland is my best girl. I am just now getting my breath after this shock. I don't want them to take up a subscription because they would get the first few men available, and the tax on them would be too great. If the commission had left those items in the budget, it would have meant that each person in Portland would have paid 2 cents, and I think that is a mighty cheap price for art."

"Usually in such cases, the city buys its own status and it buys the base, too. But Portland never got started that way, and I have tried to help her get started a little in the direction of appreciation of art. But the tax commission is not Portland; it does not represent Portland. My heart is very tender toward the 99 in every 100 people of the city who do want the statues. I am going to plead very hard before I take the statues elsewhere, although several other cities have been anxious to have them."

"The tax commission takes the position that the city is doing me a great favor to accept the statues. J.N. Teal is back of the commission's to make the provision in the budget. Joe doesn't want any more statues given to the city, particularly bronze statues, because they might detract from those already here."

"In the case of previous gifts to the city, the bases were given with the gifts, but in each case they had to be. The Elk fountain has a base that is a water trough. You couldn't give that sort of a statue without a base. The same is true of statues in the city park, where a huge boulder is the base, the only appropriate base."

"Joe Teal is a fetish with lots of people here, and he made more trouble for me over the Roosevelt statue than everybody else together. He is trying to make it so annoying for people that nobody will give the city any more bronzes. It is pure jealousy on his part."

"Commissioner Cox works for Joe Teal and Commissioner Goldsmith is the Don Quixote who charges all the windmills that Sancho Pancho Teal points out."

Commissioner Goldsmith said that the commission had voted unanimously against the bases, and that he voted against them as a matter of principle, believing that tax money should not be used for purposes of that sort.


"I enjoy statues just as much as anybody, and I told Dr. Coe so several times and would be glad for Portland to have them. When Grover Cleveland was governor of New York the legislature passed a bill providing for a statue to Civil war veterans. Cleveland vetoed the bill on the same ground that I voted against the bases--that it was not a proper expenditure of tax money. Cleveland said that it was not connected with the safety and substantial welfare of the public, and that is my stand now."

"We gradually have drifted away from the original purposes of tax money, and are using such money for things that we never heard of before. That is the main reason that we are overburdened with taxation. When we spend money for such things we have no money left for necessary things."

"I have taken an oath to do certain things and I don't propose to prostitute that oath. Dr. Coe is making this thing a personal matter. He suggested that he give the city a statue of Moses, and asked, whether there was any land available in Goldsmith's addition for a statue. I suppose he intended those remarks for a sop, thinking that I could be bought." 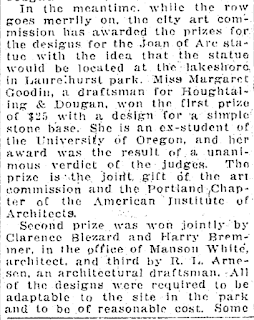 In the meantime, while the row goes merrily on, the city art commission has awarded the prizes for the designs for the Joan of Arc statue with the idea that the statue would be located at the lakeshore, in Laurelhurst park. Miss Margaret Goodin, a draftsman for Haughtaling & Dougan, won the first prize of $25 with a design for a simple stone base. She is an ex-student of the University of Oregon, and her award was the result of a unanimous verdict of the judges. The prize is the joint gift of the art commission and the Portland Chapter of the American Institute of Architects.

Second prize was won jointly by Clarence Blezard and Harry Bremmer, in the office of Mason White, architect, and third by R.L. Arnesen, an architecture draftsman. All of the designs were required to be adaptable to the site in the park and to be of reasonable cost. Some were received that were elaborate. 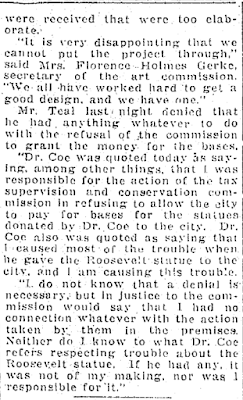 "It is very disappointing that we cannot put the project through," said Mrs. Florence Holmes Gerke, secretary of the art commission. "We all have worked hard to get a good design, and we have one."

Mr. Teal last night denied that he had anything whatever to do with the refusal of the commission to grant the money for the bases.


"Dr. Coe was quoted today as saying, among other things, that I was responsible for the action of the tax supervision and conservation commission in refusing to allow the city to pay for bases for the statues donated by Dr. Coe to the city. Dr. Coe also was quoted as saying that I caused most of the trouble when he gave the Roosevelt statue to the city, and I am causing this trouble."

"I do not know that a denial is necessary, but in justice to the commission would say that I had no connection whatever with the action take by them in the premises. Neither do I know to what Dr. Coe refers respecting trouble about the Roosevelt statue. If he had any, it was not of my making, nor was I responsible for it." 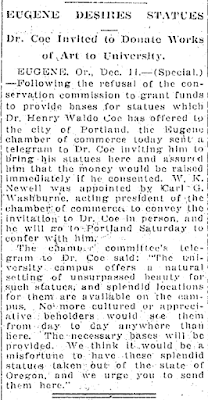 Following the refusal of the conservation commission to grant funds to provide bases for statues which Dr. Henry Waldo Coe has offered to the city of Portland, the Eugene chamber of commerce today sent a telegram to Dr. Coe inviting him to bring his statues here and assured him that the money would be raised immediately if he consented. W.K. Newell was appointed by Carl G. Washburne, acting president of the chamber of commerce to convey the invitation to Dr. Coe in person, and he will go to Portland Saturday to confer with him.


"The university campus offers a natural setting of unsurpassed beauty for such statues, and splendid locations for them are available on the campus. No more cultured or appreciative beholders would see them from day to day anywhere than here. The necessary bases will be provided. We think it would be a misfortune to have these splendid statues taken out of the state of Oregon, and we urge you to send them here."

The Oregonian, 27 Dec 1924
Dr. Coe's Relatives to Give Statue Base
East 39th and Glisan Chose as Site
City Council Accepts Offer Made by Mother and Wife of Joan of Arc Donor

Mrs. Mary J. Coe, 90, mother of Dr. Henry Waldo Coe, and Mrs. Elsie A. Coe, his wife, will provide the base for the statue of Joan of Arc which the doctor will give to the city, and the statue will be placed in the south half of the circle at East 39th and Glisan streets, where it will be dedicated on Joan of Arc day, May 30.

Dr. Coe last night awarded to the Blaesing Granite company the contract for construction of the base, and stipulated that the design which was awarded first prize in a recent competition shall be used as the working basis.

These decisions were announced yesterday at a special meetings of the city council, at which Dr. Coe told of the desire of his wife and mother to provide for the statue base. David L. Hoggan, contractor and recently appointed member of the city zoning appeal board, had offered to provide the base that would meet any specifications that Dr. Coe might suggest. He made his offer to Mayer Baker, which was the card up the mayor's sleeve when he announced that the bases for the Coe statues would be provided, despite the fact that the tax conservation commission had eliminated the items from the city budget. Yesterday Mr. Hoggan appeared before he council and repeated the offer, but Dr. Coe said that his wife and mother had insisted on the opportunity to make the gift to the city and that he preferred that they should do so. Members of the council expressed their appreciation of Mr. Hoggan's offer, but said that they would follow Dr. Coe's wishes in the matter.

The council overruled the art commission, which twice recommended that the statue be placed at the lake shore in Laurelhurst Park. It was pointed out that several fine trees would have to be chopped down should the statue be placed in the park, and the council did not feel that the natural beauties of the park would go well as a setting for a formal status. It was said that at East 39th and Glisan streets the statue could be seen for a great distance and there was ample room there for persons who desired to stop their automobiles to park and get out to look at the gift.

The decisions on the statue were reached suddenly yesterday because Dr. Coe will leave today for a three or four months' visit to the orient, where he will make a study of hospitals and their equipment. He said that Rainier chapter, Daughters of the American Revolution, was making an effort to have the statue of Washington placed near a replica of Washington's home at Mount Vernon, which is being constructed in Seattle. The daughters wrote Dr. Coe a letter, which he received yesterday and which promised that a base would be provided the letter was signed by Mrs. David Brown, regent.

"Vancouver, Wash., and Oregon City, each of which has a valid claim, are making an effort to get my statue of John McLoughlin," said Dr. Coe. "In Vancouver they plan to replace the stockade that was there when McLoughlin was there. I have had so much trouble with the tax conservation commission here that it might save me considerable worry if I gave the statue to one of those cities instead of to Portland."

Mayor Baker yesterday named the following committee to take charge of arrangements for the placing of the Joan of Arc statue and for the dedication ceremonies. 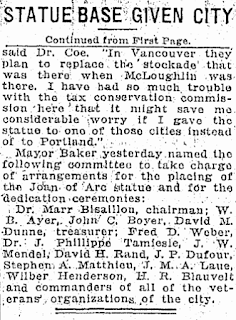