Jun 1912: The Story of Laurelhurst

Reprinted from “Laurelhurst Homes, A Monthly Journal,” published in Jun 1912 by Mead & Murphy. 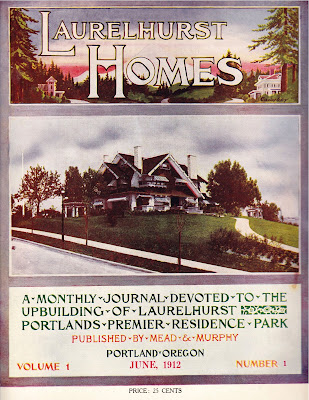 It was a scant quarter of a century ago that W.S. Ladd, pioneer capitalist, in selecting the finest tract of land he could find about Portland on which to place his herd of imported Jersey cows, unconsciously picked out the site of Laurelhurst, today the most beautiful and aristocratic residence district of Portland. The gently sloping green area that he enclosed within a mile and a half of the Willamette River became the famous Hazelfern Farm, noted not more for its wonderful cattle than for its unparalleled natural beauties.

The beautiful Hazelfern Farm of 25 years ago is the even more beautiful Laurelhurst of this day.
Had the sturdy old pioneer banker sought to guide the future growth of the city he did so much to develop, when he set aside the land for the Hazelfern Farm, he could not by any chance have chosen better. It is doubtful if there is any high class residence district on the Pacific Coast that in natural advantages, beauty, accessibility, location, and all around desirability can compare to it; certainly there is none in Portland.

Laurelhurst is by natural endowment peculiarly an ideal site for a suburb of fine homes. When W.S. Ladd laid it out as his Hazelfern Farm, it was veritably in the wilderness and the mile and a half to the city lay through forest and by country road.

Now it is the very center of the East Side residence section, yet set apart and forever exclusive from surrounding territory by its advantage of position and location. And with all this, it is a mere 15-minute ride by [trolley] car to the business center. 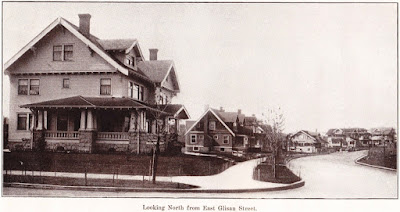 Mr. Ladd, Sr., was influenced in his choice of Hazelfern Farm, we may suppose, partly because it lay high and sightly, along the top of a sort of easy plateau over 200 feet above the river, and for its fine soil and sunlight and mild breezes. In the sultriest day of summer it is free from the grime and dust and smoke of the city, while a gentle northwest breeze brings cool and comfort. Further to the east the soil becomes gravelly and difficult to cultivate, but all the former Hazelfern Farm is composed of deep, fertile loam.

The advantage of such a soil in a residence district may be seen today in the fine lawns and healthy flower beds that make every Laurelhurst yard an individual beauty spot.

The story of how the choice tract was transformed in a few months from farm to residence district with beautiful homes, paved streets, cluster lights and every possible convenience is as interesting as that of the original Hazelfern Farm of a quarter century ago. The birth of a wonderful development are due to two Seattle men, Frank F. Mead and Paul C. Murphy, who, realizing Portland’s opportunities for legitimate real estate development, came here a little more than two years ago.
They had looked around the city but a short time when they saw the Hazelfern Farm, the present Laurelhurst. Their broad experience enabled them to recognize instantly its great possibilities as an exclusive residence section, and they determined to handle it at whatever cost.

One of their first steps was to interest in their plans for taking over the property, Charles K. Henry and H.R. Burke, prominent realty operators and business men of this city, who with Messrs. Mead and Murphy, organized a company to buy the property. Plans were laid for the development of the tract along scientific and beautiful lines and work commenced at once. Just in a manner to improve the tract, however, was in itself a big problem. Messrs. Murphy and Mead desired above all else to retain the original and natural beauty of the land, so it was decided that all development work should be done with the idea of enhancing and bringing out to fullest advantage this natural beauty. Skilled engineers were employed to make the plans.

To avoid the unsightly cuts and square corners that would have resulted had the streets been made in accordance with the unbeautiful street scheme of the rest of the city, all avenues were laid out in sweeping curves to conform with the natural lay of the land. Two magnificent boulevards, both 80 feet wide, were put in to bisect Laurelhurst from north and south and from east to west.

The improvements involved an immense amount of work and money. When they were completed there were 26 miles of asphalt paved streets, forever banishing mud from Laurelhurst, 52 miles of cement sidewalk and curbing, and many thousand feet of sewer and Bull Run water pipe. All these improvements were put down to last a hundred years.

Even then Messrs. Murphy and Mead were not satisfied until they had installed hundreds of cluster lights, making Laurelhurst as bright by night as by day and the best lighted section in Portland. As a final touch they imported fancy shade trees to plant in the parking between sidewalk and street.
All told these improvements, which transformed in one short year the Hazelfern Farm of W.S. Ladd into the modern Laurelhurst, cost close to $2,000,000. Added to this, the owners had set aside a tract of 25 acres near the center of Laurelhurst, which the city later purchased to keep forever as a city park.

Since that time, the progress of Laurelhurst has been little short of astounding, although it had been foreseen by these gentlemen who had the foresight to see into what the Hazelfern Farm could be made. Already nearly 2000 lots have been sold. Enough buildings have been contracted to bring the number of homes in Laurelhurst by the end of 1912 to 500. 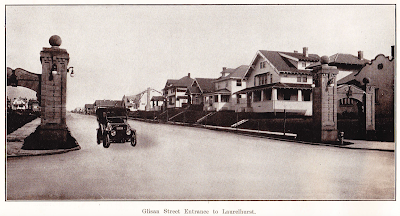 Some of the most costly dwellings in the city have gone up here. Among them is the fine residence of Charles K. Henry, near the center of the tract, which cost $40,000. All told, the amount of money spent in home building will reach another $2,000,000 by the end of 1912.

A pleasant feature of all this is that the demand for houses has kept ahead of the supply. Those who have invested in Laurelhurst are persons who have invested that they may own their own homes. The speculative buyer has been eliminated almost entirely from the outset.

Practically all who have bought lots have done so with the end in view of eventually building on for themselves, either with their own funds or by taking advantage of the second mortgage privilege allowed them by the owners of the tract, by which they can obtain financial aid in building, repaying the same by easy monthly installments.

So steady has the demand for building lots been that in the first four months of 1912 alone, ordinarily considered dull real estate months, 350 lots have been sold.

But the story of Laurelhurst is not complete without a word about the splendid transportation facilities it possesses. No other suburb has car service that can approach it. Not one, but five different car lines pass through Laurelhurst or along its outskirts. On any of these car lines there is at least a 10-minute service through the day and at night a service of 5 minutes or better. This car service will continue to get better.

Mr. Ladd, choosing his site for the Hazelfern Farm of his Jerseys, indeed chose better than he ever thought. If there were no other reason for remembering him—and there are many—it would be much to his memory that the spot he picked as the most beautiful and Portland has become the most beautiful and exclusive residence district of not only his own fair city, but all of the Pacific Coast. 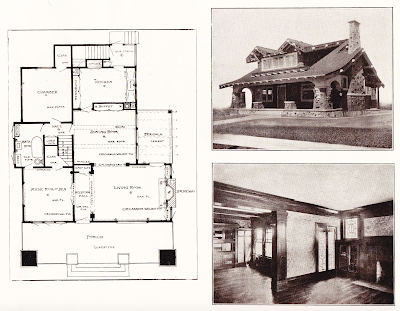