Even though it was cold and windy this morning, it was not raining (much), so we went outside to finish the planting strip path. We're using chunks of broken concrete (called urbanite) leftover from breaking up our driveway where it was sloped incorrectly.

Jeff had dug the path last week, when we actually had some nice weather.

This morning we filled the ditch in with several wheelbarrel loads of gravel and stomped around on it to level and tamp it down. Then we dumped in several inches of sand. Then Jeff put the concrete chunks back on the sand and we filled in any large gaps that were left with appropriately-sized pieces.

Jeff spent a lot of time working sand in and around the chunks to level them. 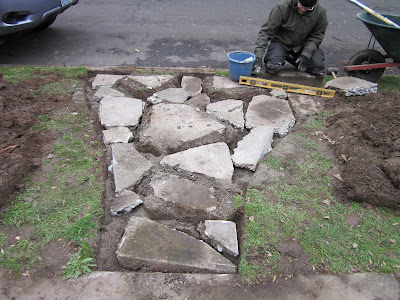 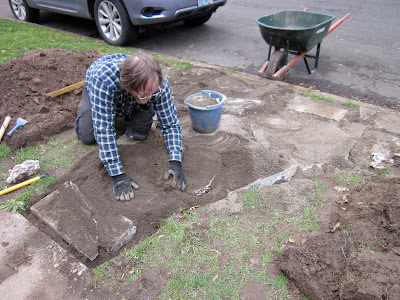 Then we put a large pile of sand on top and Jeff swept it around to find high or low spots. Then he spent another half-hour or so fixing those pieces. 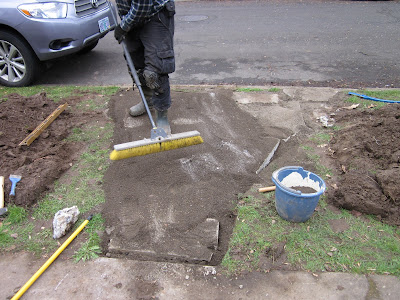 Then he was able to mostly call it quits for the day. It could probably use some more sweeping, but the forecast is for rain for the next 10 days, so the rain will probably wash off the excess sand. 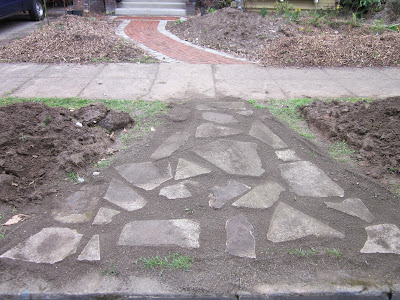 Posted by Sharon Kwilter at 1:41 PM