After searching for many months, Sharon finally found a great deal on new traditional style brass interior door hardware. She's writing to share this affordable resource with others who might be having the same re-plate or replace dilemma.

We had been planning to re-plate the existing door hardware, but it actually turned out to cost about the same, even a bit less for some doors, to simply replace the pieces.  Sharon looked diligently for a good deal on the plating (she wrote at least half a dozen re-platers for email quotes), but the least expensive deal she was able to find was $14 per knob and $12 per plate which would come to $52 per door!

So, ultimately, when we found Crown City Hardware, we simply decided to replace the hardware on the doors. Their interior set is $49.99 per door and we believe it is solid brass—not plated. 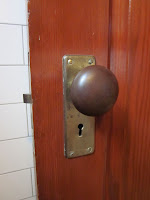 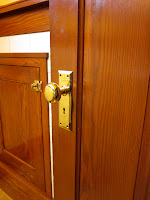 We still haven't installed the screws on the new set because the locks came with phillips screws. We're going to buy slotted screws which are more accurate for the period. It is nice that these new sets can be installed and tightened up and stay in place without the screws.

They also sold a neat dummy spindle in order to assemble matching dummy knobs for our pantry doors. 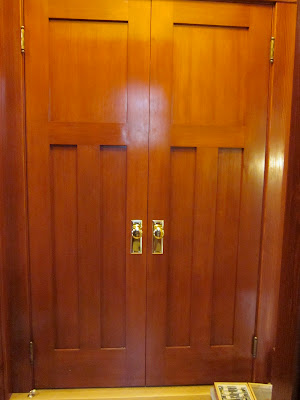 We did run across a problem with a privacy lock set for the bathroom door; the pin sticking out from the turn latch doesn't fit into our existing mortise locks. We're trying to find out if we can change the part on the new plate that will fit in our existing mortise, but we might have to buy modern mortise locks for the two bathrooms, because ultimately we'd like to be able to lock the door when someone is using the room.
Posted by Sharon Kwilter at 4:31 PM