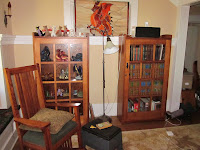 We've got the front part of the parlor mostly set up. There's still too much loose stuff everywhere, but we're really making progress. I think this front part of the parlor is going to be our "reading nook." We really hope to do more reading now that Jeff is unemployed and we've downgraded the priority of SCA. I had to put dragons in one of the bookcases, because there was really nowhere else to put them yet. 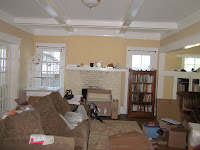 We're doing an experiment with the living room. I have the crazy idea that when we remodel we should build in bookcases on either side of the fireplace, as was so often found in classic craftsman design. Jeff isn't crazy about the idea, because he thinks the room will be too dark. So, we're giving a bookcase in front of the window a try and see how it goes. Once November hits, Jeff may win this round. 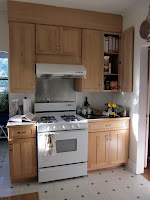 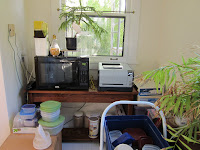 Jeff's kitchen is looking pretty well unpacked and organized and we've been enjoying his awesome home-cooked meals. The finished porch is our temporary internet station until we can get the phone wired into the basement. 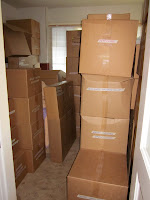 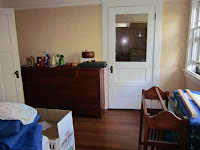 Our master bedroom is virtually untouched as we've been focusing on other rooms of higher importance. We've got a bedroom set up in the basement so the upstairs master bedroom isn't really needed yet. 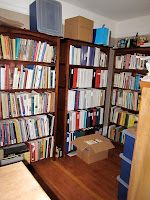 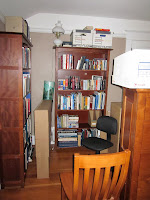 We managed to cram six bookcases and a lateral file into the spare bedroom. It's also ended up being the room where we are storing all the boxes and furniture that otherwise don't have a place to go, so the room is cramped and hard to take pictures of. 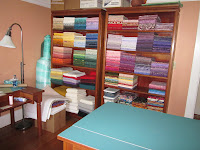 I can't seem to stop reorganizing fabric stacks in my sewing room. I must stop now! =)
Posted by Sharon Kwilter at 7:09 PM